The 15th biennial general meeting of the North Eastern Tea Association (NETA) was held today at NETA auditorium, Golaghat. NETA which represents seventy Tea Gardens of Assam made its beginning at Golaghat in the year 1981 NETA turned 30 in 2011. Golaghat has always been playing a significant role in the tea industry of Assam. There is a saying that one can’t make bad tea in Golaghat belt. The small tea growers’ movement was also started from Golaghat district. As per the latest statistics, Golaghat has the third highest number of small tea growers (STGs) and third highest number of bought leaf factories (BLFs) in Assam. Addressing the meet Bidyananda Barkakoty, Chairman NETA urged the of Assam to officially declare Tea as the “State drink of Assam” and at the same time request Govt. of Assam to persuade Govt. of India to declare Tea as the “National drink of India”. Tea is the national drink of Britain and China and at the same time Sugar cane juice and Whisky is the national drink of Pakistan and Scotland respectively. Like national animal, national flower, national bird, national drink, national fruit etc. tea can also be declared as the National Drink. He further added that the 180 years old Assam tea industry contributes 13% of global tea production and also produces more than 51% of India’s tea. The total turnover of Assam tea industry is 5,000 crores and it employs about 5 lakh permanent workers and another 5 lakh seasonal workers. Assam tea industry is also helping to maintain ecological balance by providing huge green cover due to the tea plants and shade trees. In fact, many advanced countries are in search for such eco friendly industries. Regarding NETA’s demand for declaring tea as the State Drink of Assam, Mr. Barkakoty said that Tea is a health drink. Many researches worldwide found that drinking tea helps boost the immune system, lowers blood pressure, prevents heart disease, fights cancer, loses weight and so on. As per independent dietician Dr Carrie Ruxton's research on caffeine at King's College, London drinking eight cups of tea daily can help fight heart disease, improve brain power and also boost longevity. Assam tea is famous worldwide for its strong, bright and full-bodied liquor. Tea integrates India as 85% of households in India consume tea. Tea is widely consumed by all sections of people – rich & poor, young & old, men & women; and across all religions & communities and in all the States of India and is the cheapest beverage of the world after water. In Assam, tea is not just a product or commodity. Tea is a culture – a culture steeped in history; and a history replete with highlights of development and contribution to economic growth and social progress.

Ambubachi Mela to begin on Friday

21 Jun 2012 - 2:09pm | editor
Kamakhya Temple is all abuzz. Ambubachi Mela is set to begin from Friday. Thousands of pilgrims are pouring in the must –visit spot atop the beautiful Nilachal hill to attend the four-day...

30 Oct 2014 - 5:15pm | AT News
Chief Minister Tarun Gogoi on Thursday threatened to stop ONGC operations alleging injustice to the state. An angry chief minister told reporters in New Delhi that he was extremely unhappy with the... 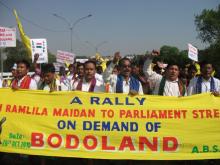 29 Oct 2010 - 4:43pm | Ranjan K Baruah
All Bodo Students Union (ABSU) has added another spine on their demands of creating a separate state of Bodoland by organizing a mass rally at New Delhi on 28th October.. The mass rally started from...