Gargaon college of Sivasagar district will organize the 20th Tanu Kunwar Memoial Annual All Assam Inter College Debating competition on September 28, 2011. The topic of the competition is: ‘Corruption in all walks of life can be weeded out only by enacting a powerful act in force’.

Late Tanu Kunwar was the founder principal of Gargaon College and former MLA of Nazira constituency. 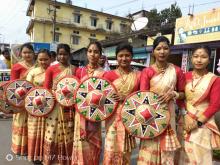 2 Feb 2020 - 10:23pm | AT Kokrajhar Bureau
KOKRAJHAR,FEB 2: A colourful cultural rally was organised today in Kokrajhar in connection with the closing ceremony of the 2nd UNA Festival which showcased attractive cultural integration amongst...