An interactive meet with Pradyut Bordoloi, the Minister for Industries, Commerce and Power was held at Golaghat at the NETA Conference hall on the evening of 24th Sep. The interactive meet was organised by the Joint Forum of ATPA (Assam Tea Planters Association), NETA (North Eastern Tea Association) and BCP (Bharatiya Cha Parishad). About hundred Tea Planters of Tinsukia, Dibrugarh, Sivasagar, Jorhat and Golaghat districts participated in the meet. During the interactive meet with the tea planters, Bordoloi said that the appeal to declare tea as the State Drink of Assam is under serious consideration of Govt. of Assam and he expected that the declaration will take place soon. Issues such as fertilizer, pollution fees, e-auction, land lease, Guwahati Tea Auction Centre, Assam Gas Company matters etc. were discussed in detail. The Joint Forum of ATPA, NETA and BCP has submitted number of memoranda on host of issues relating to Assam tea industry. Bordoloi stressed on the need to produce quality orthodox tea since in world tea market shares of CTC, Orthodox and Green Tea are 41%, 45% and 14% respectively but Assam produce only 8% orthodox and 92% CTC teas.

Bordoloi also visited Jamguri, Oating and Gorunga Tea Estates in Golaghat district. After the visit Bordoloi said "Thrust has been to enhance the quality of Assam tea and set new standards for tea producers of Assam. As such, we are trying to encourage best practices in tea production and while inducing the best practices, lowering of MRL (Maximum Residue Limit) and promoting organic culture and orthodox production is upper most in our agenda". While talking to Assamtimes Bidyananda Barkakoty on behalf of Joint Forum of ATPA, NETA and BCP said that the planter community was highly impressed with the amount of knowledge that Industries Minister displayed in regard to the tea industry and appreciated the Minister's sincere effort in solving the issues of the Assam tea industry.

Rajmahal Theatre at Nagaon from April 4

24 Mar 2010 - 4:06am | bishwajeetsinha
The semi-urban belt of Nagaon is continued to witness the variety theatrical presentation by multiple troupes and latest in the band-wagon to join the club are ‘Rajmahal Theatre’ with...

3 Aug 2015 - 7:09am | AT New Delhi
India and Bangladesh border guard authorities are meeting in New Delhi on Monday three days after both the countries implemented the land swap deal.Led by Border Guards Bangladesh director general... 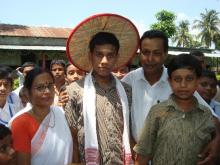 30 May 2010 - 5:55pm | Juthika Das
Jugal Talukdar shines at the top most in the list of HSLC results that was declared today. The people of Barpeta over joyed at the continuous success of the candidates of Barpeta district. Jugal...
Follow @Assam Times