A Tribute to Jitendra Nath Barooah

Last Tuesday evening I had a shocking phone call from a friend telling me Jitendra Nath Barooah passed away in his sleep at his Southfield residence. He had a heart attack, lying fully clothed in his bed. Unknown to anyone when actually he died. It was only came to light when a neighbour raised the alarm as he was not been seen around for few days. Soft spoken loving, kind and gentle person, he was everybody’s moromor, Basa da – a great loss for the Assamese Community in London. He died at the age of 85.

Jitendra Nath Barooah was born and raised in a well-known family at Jorhat. As a brilliant boy to his parents after completing High school he went to join Banaras Hindu University and had his graduation in Glass Technology in 1949.

Cricket and Table – Tennis was his favourite games during his student days. At home, he played cricket regularly and joined Assam Cricket Board. As a left-hand spinner, he was the Captain of the cricket team representing Assam in the Ranji Trophy Tournament from 1952 to 1955. He was also an excellent table-tennis player and was elected the Secretary of the Assam Table Tennis Association.

After returning to Assam he worked for Tea brokers for few years. In his father's memory he established a trust for the benefit of Jorhat Lions Club Eye Hospital, Jorhat Theatre Hall and the Jorhat Music School. As an ambitious young man he was hoping one day to come to England looking for better prospects. The day was August 15, in the year 1956, Jitendra Barooah and his two friends Jogen Baruah and Prafulla Khaund decided to board on a ship heading for the West to fulfill their dream. The ship was returning from Indo – China bringing French soldiers home and there were room for passengers in the lower deck. From France all of them came to London by train, where Jiten Barooah established his residence and the other two friends left for USA.

He completed his PhD in Chemical Engineering from Imperial College, London. Employed by British Gas Company until his retirement in the early 1990’s. Ever since he lived in Southfield. He was married to Rosemary Kemp whom he divorced later, leaving behind his son Robin who is settled in USA.

Words are sometime inadequate to convey ones feelings love and admiration. Certain images remain etched in our memory through out our life. That tall, calm face is still vivid in my memory. What can one write about a lost friend who was a model of inspiration for all who came in his contact. I became close to him throughout my cultural activities for the community. He loved music, never missed any of my musical function, film show at Nehru Centre whenever I organized. His comments and appreciation were most valuable – a great inspiration to me.

I remember that evening last year after the premiere show of “Kushal Konwar” at Nehru Centre. Basa da was so pleased telling me some exciting true stories about Kushal Konwar’s life as he spend some time with him and other freedom fighters in his younger days at Jorhat. He suggested me to do a write-up and was going to provide me some more information about the great Swahid of Assam. But alas ! time and tide wait for none. It is very difficult to believe that the cruel hands of destiny snatch away a loving person – a dear friend.

Basa da was one of God’s chosen ones, he was abundantly blessed in every way, even in death he was fortunate to step away gracefully to meet his creator.

You are no longer with us but your love and the warmth will remain with us forever. And you will live on through us. Let me bow myself in your memory.

25 Feb 2010 - 12:26pm | editor
The roads leading to Namrup from Sonari to Namrup as well as Nahakatia to Namrup are in very bad condition. It is hard to imagine such pathetic roads in this twentieth century. Specially in an... 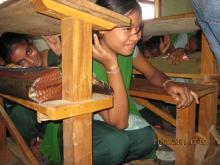 21 Sep 2011 - 11:03pm | brahma2011
After the devastative earthquake that rocked in Sikkim on Sunday including in different parts of northeast States, the Karbi Anglong district administration has taken up emergency and earthquake...
Follow @Assam Times