25 child scientists from Assam will attend the 19th National Children's Science Congress to be held in Jaipur National University campus (Rajasthan) from December 27 to 31.The child scientists had been selected at the state level NCSC held atNarayanpur (Lakhimpur) from October 13 to 16 under the supervision of ASTEC (Assam Science Technology & Environment Counsil) Guwahati.The child scientists had been selected on basis of their projects prepared on the focal theme Land Resources: Use for Prosperity, Savefor Posterity. According to Dr. Chandra Baruah, State Coordinator NCSC, Assam the child scientists will move to Jaipur via New Delhi byNE Express on December 24. A two days orientation programme has alsobeen arranged in Botany Dept of Cotton College Guwahati on December 22 and 23 before their departure to Jaipur.

20 May 2017 - 11:08am | AT News
A huge area in Tinsukia district bordering Arunachal Pradesh seems to have become a safe den for a section of rebels to unleash terror. Apart from ULFA, some NSCN (K) rebels are believed to have... 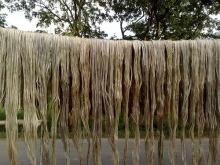 30 Nov 2014 - 5:42pm | Jintul Talukdar
All is not well for Sarbesh Ali. Jute cultivation will no longer be his staple source of livelihood. Same fate awaits Mofesh Ali. He won’t be able to reap rich harvest this year. This is what...