Polling in progress for KAAC amid tight security

Amid tight security pollings are in progress for the Karbi Anglong Autonomous Council on Wednesday. The polling began at 8 in the morning to end at 4 in the afternoon. The turn out is said to be moderate one.

Long queues of voters are seen in front of the polling booths. Polling began at 9 in the morning in some booths due to dense fogs. The authorities have deployed 231 polling personnel to conduct polls in 197 sensitive apart from along with 33 remote and three hyper sensitive polling stations.

Hamren subdivision has the maximum number of polling stations, some of which take 10 to 16 hours to reach. Bokajan subdivision located in the northern part of the vast 10432 sq km region of Karbi Anglong district has 68 difficult-to-reach polling stations. This is the first time the state commission will conduct polls in the council.

Thrust on sports in Tirap

19 Oct 2015 - 8:19pm | AT News Itanagar
The week-long tribal games and sports in different blocks of Tirap district conducted at Deomali on Sunday. Speaking on the occasion Tirap Deputy Commissioner Ravi Jha appreciated the effort of... 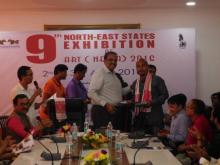