The voters of Golaghat and Khumtai legislative assembly constituencies will now have their photographs printed on the electoral rolls. A meeting with all the major political parties of the state was held today at the conference hall of Deputy Commissioner’s office Golaghat regarding the preparation of photo electoral roll. The meeting was presided over by Sanjib Gohain Baruah Deputy Commissioner of Golaghat where delegates from AGP, BJP and Cong (i) were present. The details of the proceeding were explained to the delegates by Pervez Amin District Election Officer. While talking to Assamtimes, he informed that there are 2,77,633 voters in both Golaghat and Khumtai legislative assembly constituencies taken together and from the first week of April the Booth Level Officers will make a door to door visit to every electorate’s house to collect data and photograph. He further informed that each electorate will be allotted a specific form issued in his/her name with all the relevant details of the concerned electorate printed on the form and if there is any anomalies then the Booth Level Officer will rectify the same immediately. Amin was hopeful of completing the entire project by September before the publication of draft photo electoral roll of the state. It is pertinent to mention that photo electoral roll is one which includes all the details of the voters as mentioned in the electoral roll plus the photograph of the voter. This type of an electoral roll is much reliable as far as fraud prevention is concerned. 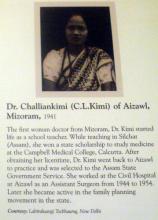 5 Mar 2008 - 4:05am | Ranjan K Baruah
For some people it might be for fashion or style but for some it says the history as it documents the past. Photos are very much important, as they are part of documentation process. ‘Re-...

4 Feb 2014 - 12:29pm | AT News
United Liberation Front of Asom (ULFA) has dared Narendra Modi to withdraw the non Assamese settlers from the state.In a strongly worded statement issued to the media on Tuesday, the outfit said that...
Follow @Assam Times