In yet another bizarre incident that runs into a hail of surprise, a magistrate was arrested when he was trying to bribe KMSS leader Akhil Gogoi on Tuesday.

Police arrested Golaghat district additional deputy commissioner Anamuddin Ahmed in Jorhat when he approach Gogoi with Rs 5 lakh in cash as bribe at around 8-30 in the evening.

Gogoi, who refused to accept the amount as bribe informed the police who later rushed to the spot and arrested the magistrate. 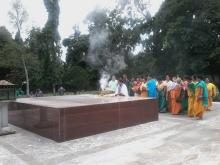 29 May 2016 - 11:01am | AT Kokrajhar Bureau
Assam Forest Minister Pramila Rani Brahma after taking oath of minister in the state government on May 24 last, paid floral tribute to Bodofa Upendra Nath Brahma, former president of All Bodo...

21 Sep 2015 - 11:18pm | Siddhartha Handique
One after another expose seem to have left the Golaghat police red faced. After the stunning extortion near Dergaon the other day, a section of policemen draws more ire from a number of organizations...