Prime Minister Manmohan Singh will be on a day long tour to Assam on April 7.

Dr Singh confirmed it before Chief Minister Tarun Gogoi on Thursday who called on him on Delhi.

The Chief Minister also called on Union finance minister Pranab Mukherjee and urged him not to revise the oil royalti policy fearing it would have adverse impact on the oil reach state.

30 Nov 2016 - 8:30pm | AT Kokrajhar Bureau
Security forces belonging to police and army apprehended a linkman of NDFB (S) from Dhanpur area under Kachugaon PS in Kokrajhar district early this morning. Based on information about moving...

8 Feb 2013 - 6:48pm | AT News
Dispur police intensifies crackdown against the thieves who have been striking in the city a day after the seizure of a huge quantity of gold, silver and diamond ornament from a person.Marathon... 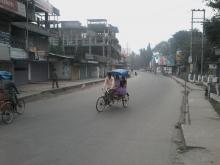