Assam on Friday clinched the Mir Iqbal Hussain Trophy defeating Chandigarh 2-0 in the 34th Sub-Junior National Football tournament at the Nehru stadium. The home team scored a goal in each half as they blanked Chandigarh and seized the initiative right from the kick-off.

They were eventually rewarded in the 11th minute when Milan Basumataray slotted home from close after being fed by Lalzeiram Hmar from the right – a lead which Assam maintained till the interval.

18 Jan 2010 - 10:23pm | bishwajeetsinha
When it comes to experiencing rich cultural heritage of Assam , its theatre presents the life full of combination between reel life and real life. Compare to dying state of theatres elsewhere, it is... 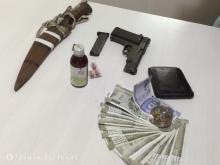 10 Jan 2015 - 6:53am | AT News
Amid a pall gloom, the mortal remains of Amarjyoti Kashyap has reached Jorhat two days after the Dibrugarh university professor met watery grave on the Arabian sea in Gujarat.Hundreds of people...
Follow @Assam Times