Jorhat police on Friday got remand of Panchi Gogoi Dutta after they arrested the main accused in the Ginoria kidnapping cases on March 10.

A lower court in Jorhat remanded Dutta to five days police custody after she was produced before it. She was arrested from Deoghoria with the help of Nagaland police acting on the confessional statements of Nayanjyoti Phukam, Naba Gogoi, Rina Neog, Mrinal Neog and Aftabuddin Ahmed who was arrested on Thursday from Titabor.

28 Jul 2011 - 5:36am | Daya Nath Singh
Reacting to the recent ‘blatant lies’ of the Assam Power Minister, Pradyut Bardoloi, Krishak Mukti Sangram Samiti (KMSS) leader Akhil Gogoi made it clear that he is not opposed to the... 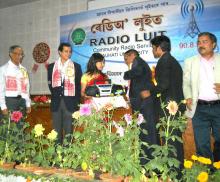 4 Mar 2011 - 2:16am | Abdul Gani
The community campus radio centre of Gauhati University (GU) was formally launched by Sreedher Ramamurty, the director of Commonwealth Educational Media Centre for Asia, to set a new mark in the...

8 Mar 2014 - 2:26pm | AT News
Barring Mongoldoi, Nagaon and Dhubri, AICC has finalized the list of the candidates for the upcoming Lok Sabha polls.This was what chief minister Tarun Gogoi told reporters in New Delhi on Saturday....