In a joint counter insurgency operation by 25 Assam Riffle and Dima Hasao Police in Kepalo village near Haflong 12 suspected apprehended and recovered one bolt action riffle, ammunition , gelatin stick and incriminating documents of NSCN (IM) on Thursday. The documents included list of 278 cadres with code and Identity no, receipt book etc. Interrogation is on. Police hoped more vital information relating to NSCN activities in the district of Dima Hasao would be revealed from these apprehended suspects.

26 Jan 2015 - 6:48pm | Kakali Saikia
Magh Bihu is not confine to Assam only these days. The much vaunted festival seems to have gone beyond the geographical boundaries at the initiatives of a section of Assamese people residing outside.... 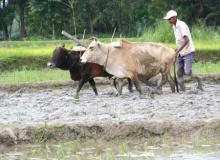 25 Jun 2008 - 3:00am | editor
A farmer is seen ploughing his field at Ambagaon, Udalguri, as the monsoon arrived timely in the region this year. Most people in this area solely are dependent on agriculture. -UB Photos