Riots a blot on the nation: PM

Prime Minister Manmohan Singh on Saturday stressed a sense of security in the minds of the all affected people in the violence-hit areas. During his brief visit to Kokrajhar, Dr Singh called the ethnic clash a blot on the nation. Talking to reporters at the Kokrajhar Circuit House, he said, “it should not have happened. This is a blot on our nation."
After meeting the victims at a relief camp, Dr Singh said that the conflict was unacceptable and must come to a stop. He said Delhi would work with Dispur to provide a sense of security to all affected areas to ensure that they can go back to their houses with a secured mind and heart.

23 Dec 2014 - 11:05pm | AT News
A full scale operation is in progress against NDFB-S after the militant outfit unleashed a reign of terror by targeting the Adivasi people in Kokrajhar and Sonitpur district on Tuesday. Army, police... 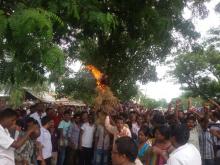 18 Aug 2014 - 12:40pm | Bibeka Dutta
Chief Minister Tarun Gogoi felt the heat of a boiling border situation when he was on a stock-taking visit on Monday. As the chief minister’s convoy arrived in Uriamghat area at 11-30 in the morning...