Police officials probing the recent Mumbai violence on BTAD riot have raised doubts on the role of a section of politicians from Assam. They sure of a particular political party’s role with vested interests and there was a strong possibility of some people from outside Mumbai being behind it.

The agencies have found that those who indulged in violence were brought to the spot in hired buses and were armed with lathis, sickles and other instruments. Two persons were killed and at least 55 injured when a protest in Mumbai’s Azad Maidan against BTAD riots and attacks on Muslims in Myanmar turned violent on Saturday with demonstrators torching vehicles and pelting stones.

5 Jun 2007 - 5:30am | pbaruah
Sivasagar Caught in the delimitation dilemma, the normal life in upper Assam districts comes to a grinding halt following a 12 hour bandh.Called by an all party forum to oppose the draft of the...

Gogoi to be produced in court

5 Mar 2014 - 10:57am | AT News
Police are all set to produce Akhil Gogoi before court on Wednesday four days after he was arrested in connection with the recent self immolation of a KMSS activist.According to sources, police will... 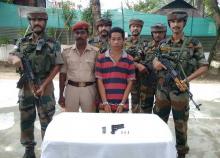