The injured Asom Gana Parishad legislator from Sootea Padma Hazarika has been flown to the Appollo Hospital in New Delhi for better treatment. Earlier on Saturday, he was brought to the city and was admitted to the Dispur Hospital. Mr Hazarika was attacked near his residence on Thursday midnight in Sootea by some unidentified miscreants. The Assam Government denies involvement of any militant outfit in it and has ordered a fast track probe into it. The regional party is demanding the immediate dismissal of the government. Meanwhile, the injured MLA has said the miscreants were known to him. But he said he would disclose their names only after the probe is completed.

11 Mar 2016 - 7:16pm | Deva Borah
Amid an escalating protest inside BJP, a few party leaders has floated Trinamul BJP much to the utter disappointment of the saffron party leadership in the run up to the assembly polls slated for... 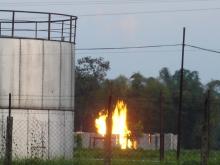 13 Feb 2017 - 8:45am | AT News
An indefinite shut down starts paralyzing normal life in the urban areas of Nagaland from Monday. Several civil society organizations in the north eastern state have enforced the shutdown after chief...