An uneasy situation prevails in Nalbari town on Friday after unidentified miscreants shot dead at a local businessman in broad day light. Identified as Ashis Maskara, the victim was on his way to a bank when miscreants sprayed several rounds of bullets before looting Rs 30 lakh from his bag. Maskara was rushed to the civil hospital. But he was declared brought dead. Local people in large number came out alleging it law lawlessness and insecurity. Boxed by circumstances, police arrested two persons in this connection. Identified as Chandan Kalita and Kunaldeep Sindhu, they confessed that they attacked the businessman. Police further recovered 5 lakh rupees from their possession.

14 Dec 2017 - 7:10am | AT News
NAMRUP:Food and civil supply minister Rihon Daimary said the poor people who have been availing off the benefits of the government schemes need not be worried. Opening a piped water supply project...

16 Sep 2014 - 2:51pm | AT News
AIUDF retains Jamunamukh assembly seat in the by polls on conducted on Saturday.Party candidate Abdur Rahim Ajmal defeated his nearest rival Congress candidate B Laskar by a margin of 22,959 votes.... 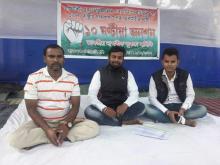 8 Dec 2017 - 7:58pm | Mithun Baruah
MARGHERITA: The Nagorik Surakhya Samity in Margherita on Friday staged a 10 hour hunger strike demanding immediate steps to repair the National Highway No 38 which has been languishing in dire...
Follow @Assam Times