To provide purified drinking water to the school children of Dima Hasao, the State Bank of India, under ‘corporate social responsibility’ distributed 'aqua guard' brand of water filters to the schools of Dima Hasao in a simple but solemn function held at the office of the Inspector of Schools, Dima Hasao on Monday.

The distribution ceremony was attended by the Assistant Inspector of Schools, Dima Hasao and several Headmasters and principals of different schools. At present, SBI has covered 30 schools out of 43 Higher Secondary and High schools of Dima Hasao and later on all the schools including ME and LP, the SBI would provide the aqua guard water filters, it is learnt.

Speaking on the occasion Sri Sujit Dey, Chief Manger, SBI Haflong branch said ‘this was a gift to the schools children on the occasion of ‘Children Day’. He also while appreciating the education department and disclosed that the rest of schools would get the filter in a very short time . 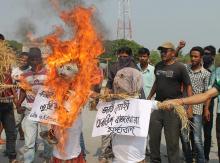 18 Apr 2014 - 4:29pm | AT News
Over ten thousand people staged dharna in front of Baska Deputy Commissioner's office a day after the attack on Nava Sarania's office in Mussolpur.    The protestors in large number...

8 Mar 2017 - 2:19pm | AT News
The All Assam Students Union on Wednesday served 12 hour ultimatum to Sarbananda Sonowal nab Soobodh Biswas, the main culprit behind the Silapothar clash where at least 10 AASU activists sustained...