Haque arrived in the Dispur before police station at 9 in the evening on Sunday where he was grilled for nearly three hours. The Congress MLA is understood to have made some startling revelations during his interrogation. His name surfaced after head accountant Mothur Chandra Nath hanged himself at his residence leaving a suicide note blaming it all on the MLA. In a 22-page suicide note, he Nath alleged that during the last assembly polls in 2011, he was forced by Laskar, who was then an Officer on Special Duty in the Irrigation department, to collect huge amount of cash from contractors working for the department to fund his election expenses. 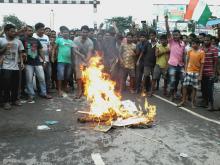 Cong to get prepared for snap polls

20 Sep 2007 - 3:25am | pbaruah
Assam Congress virtually gets ready for mid term Lok Sabha polls and will soon draw up its strategies to steal the show.Speaking to Assam Times, party’s senior leaders here say the rural body...