Community Hall inaugurated and cycles distributed to girls at Tangla

A community hall built by the Indian Army’s Red Horns Division at Bharakhata Yuva Sangh,Tangla was inaugurated by Hattigor Brigade Commander of the Red Horns Division in presence of several military and civil officials along with distinguished members of civil society. 36 cycles for poor school going girls of the district was also distributed on the occasion. Puran Deka, Principal Bharakhata Yuva Sangh School distributed the cycles to the girl students.

The project was dedicated to the villagers of Tangla by the army camp Golandi,Udalguri, under the operation Sadbhavana scheme, thereby taking another step towards promotion of educational and cultural exchange while projecting the friendly face of the Army as the people’s friend. The basic thrust being the empowerment of women and integration of various communities.

29 Jun 2014 - 11:27pm | Hantigiri Narzary
Chrisostom Tudu,BTC Executive Member from Congress in the council will tender his resignation to BTC Chief Hagrama Mohilary on Monday after party high command directed to resign him from the post... 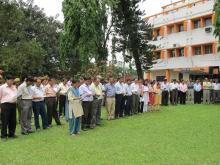 22 May 2010 - 3:04am | sankal
Showing solidarity to the rest of the nation in shunning terrorism, the employees of Guwahati Refinery, the top management and the security forces solemnly took the pledge against terrorism on...
Follow @Assam Times