Aaranyak observes Dolphin Day on the bank of Kulsi River

Dolphin Day observed by Aaranyak at Kukurmara on the bank of Kulsi River in Kamrup district today evoked overwhelming response from the local community of the area.

Dolphin Day was observed by Aaranyak  which is recognized as a Scientific and Industrial  Research Organisation (SIRO), under its  Gangetic (River) Dolphin Research and Conservation Initiative to raise the level of awareness among the community on the urgent need for conservation of the endangered species of river dolphin.

Kukurmara was selected for the purpose as it is located on the bank of Kulsi River where at least 30 species of the endangered national aquatic animal reside and is an important site for river dolphin conservation. The programme was conducted in collaboration with Kamrup West Forest Division.

The awareness programme started today with presentation of posters among the students. Over 00 students also took part in drawing competition organised on the occasion in three categories. Three awards were given to student participants in each of the three categories.

Twenty-two members of the community were felicitated on the occasion for their valued support  for dolphin conservation efforts especially to boatmen, community youth who actively participated in dolphin yatra programme.

A public meeting was held during 2 P.M. to 4 P.M to discuss issues related to river dolphin conservation. Some more community members were felicitated in the meeting that was very well attended. The programme ended on a high note with staging of a drama that is key to Aaranyak’s Dolphin Yatra that is focused on Brahmaputra River system.

19 Dec 2015 - 9:00am | Bg Gogoi
The Climate Compatible Development Film Festival kickstarted the first of its regional screening in Guwahati on Friday December 19. Three  films produced by the Climate & Development... 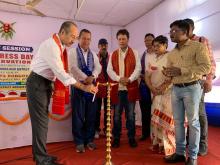 10 Apr 2017 - 9:20am | editor
A crucial meeting of BPF and AGP leadership with Amit Shah is clearing the decks for the expansion of Sarbananda Sonowal cabinet slated for April 15. Senior BJP leader Himanta Biswa Sarma along with...