He sustained injury when a detonator he carried home exploded near Gogoi's official residence at Koinadhora. Identified as Sanjib Das, the boy found the detonator attached to a wire at a stone quarry on the Assam-Meghalaya border and was carrying it home at Uday Nagar and it exploded in the high security area.

According to police, the teenager suffered minor injuries in the explosion which was a small one and caused no damage. He said that Das was administered first aid at a hospital and released. 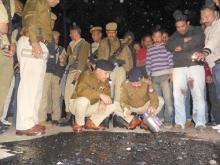 25 Nov 2014 - 6:09pm | AT News
Both Delhi and Dispur are mired in a bitter blamegame over the recent explosion in Dibrugarh were 2 persons died and 20 others sustained injury.The Assam Government on Tuesday hit back at Sarbananda...

Gogoi to quit before Sonia

9 Jul 2012 - 9:41pm | Anup Biswas
The restoration of rail communication between Lumding- Badarpur hill section of NF Railway would be completed within July 20 to 25th provided whether does not disturb, claims Divisional Railway...