Under Chief Minister’s Assam Vikash Yojana -2009-10, table Tennis Boards for as many as 11 numbers of Schools of Diam Hasao were distributed ceremonially in a distribution ceremony held at the premises of the Office of the Inspector of Schools, Dima Hasao, Haflong on Friday.

Speaking on the occasion, EM and MAC stressed importance on sports along with the studies while appealing to avail all the supports that are being provided to the student for the development of sports as well as education.

Earlier, Sri Konwar in charge of sports explained how the students of Dima Hasao, of late marching ahead in sports and achieved some prestigious rank also. Therefore he believes that the District of Dima Hasao once again gaining its name and fame in the field of sports and game.

8 Sep 2015 - 9:18am | AT News
Uncertainty still persist for the nine Congress MLAs who are prepared to join BJP. According to Assam Times Political Research Bureau, neither the central leadership nor the state leadership... 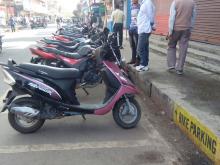 21 Dec 2017 - 11:10am | AT News
Kokrajhar: Traffic snarl is going to a thing of the past in Kokrajhar. The administration in the BTAD headquarter town has set up a parking zone to ease the traffic flow. Now there is a separate...

30 Mar 2020 - 9:29am | AT News
Golaghat: Amid the strict enforcement of nation wide to fight the killer COVID19, the gruesome assault of police on two farming women has triggered no less shock and anger among the local resident....