Socio-cultural organization of Nazira Dikhow has organised a colourful event for the third time with a day-long programme at Nazira Natiya Mandir on April 15. On this occation senior singer Apurba Bezbaruah and several other senior citizens were felicitated by the organizers. 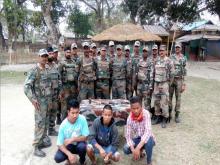 8 Jun 2013 - 4:50pm | Anup Biswas
Haflong police recovered a live grenade (No.36) from a flower pot at the residence of one Peter Sumer, Forest range Officer located near Ram Krishna Mission, Haflong on Saturday morning.It is learnt...