Numaligarh Refinery , situated at a distance of 250 KM from Guwahati and 25 KM from Golaghat, was engulfed in a devastating fire broke out at the Crude Distillation Unit (CDU) and Vacuum Distillation Unit (VDU) of the refinery in the wee hours of morning on Friday. 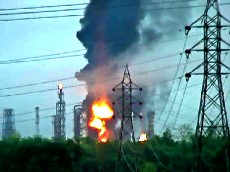 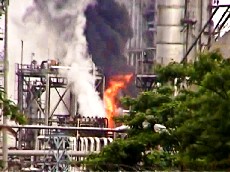 “The fire was started at around 5.24 am and in a joint effort by the fire tenders of NRL, Bokakhat, Dergaon and Golaghat were able to put off the fire at 9.40 am.” Kajol Saikia of Numaligarh Refinery Ltd. (NRL) told Assam Times. The CDU and VDU are considered to be the mother unit of the refinery as the CDU distills the incoming crude oil into various fractions, each of which are then processed further in the other refinery processing units and that’s why production has been stopped for the time being as a precautionary method, he said. He further added that till now the assessment is going on about the loss sustained by the refinery and a high level enquiry committee will be formed to investigate the actual cause of fire. He also rules out any possibility of sabotage.

It is to be noted that on April 7, 2012 a powerful blast was occurred at the hydro-cracker unit of the refinery for which the United Liberation Front of Assam has claimed responsibility.

Numaligarh Refinery Ltd. which has a capacity of 3 million metric ton per annum is the result of the Assam Accord and was inaugurated by then prime minister Atal Bihari Vajpayee on July 9, 1999 and it commenced its commercial production in October, 2000

25 Oct 2016 - 10:41pm | AT Kokrajhar Bureau
It is with political development in BTC that four AIUDF sitting MCLA and an Aikhya Manch MCLA joined in ruling BPF party at a party meeting held in New Delhi today. BPF party has now strength 27 out...

8 Nov 2014 - 6:57pm | Hantigiri Narzary
The Commissiner, Lower Assam Division Sabbir Hussain visited Chirang district on Friday as a Roll Observer in connection with the Special Summary Revision.Hussain during his visit, held a...