At a time when Assam and Nagaland are embroiled in bitterness with both the states declaring blockade and other prohibitions against each other, there comes a piece of good news that some prominent and senior citizens of Wokha District in Nagaland and Golaghat District in Assam have formed a friendship forum to work as a harbinger of peace between the people of both district of the two states.

The process of forming the Forum has begun last year with first consultative meeting held on 27th March, 2012 at Hotel Saramati in Dimapur. It was presided over by Yansathung Jami, President Kyong Hoho and attended by noted citizen of both sides like Bhaben Gohain (IPS), Dinesh Gogoi (Retired Professor), TC Kithan (NCS Retd), N Ngullie (Chairman, Hoho Dimapur), Debajit Lahon (Journalist), Elvis Barua (Social Worker), C Kikon (IPS, ADGP Retired), President of Kyong Students Union etc. in the meeting, it was being contemplated to form a mechanism under the name and style of “Friendship Forum of Golaghat and Wokha Districts” and also some seasonal office bearers had been selected and a drafting committee was formed with three members from each side.

Recently, on the meeting held at Merapani on 30th May the seasonal office bearers have handed over their charge to permanent office bearers of the Forum having Pinyimthung Lotha as Chairman, , Dinesh Gogoi as Vice Chairman and Elvis Baruah as General Secretary.

“The Nagas and Assamese always had a brotherly relationship but when we were subjugated by Britshers our brotherly relationship weakened and some catalyst forces also contributed to inflicting further damages to the age old relationship. In order to bring back the old brotherly relationship some senior citizens from neighboring hill area of Wokha in Nagaland and Golaghat District of Assam came forward to and accordingly this Forum has been formed” T. Nath, one of the convener of the forum told Assamtimes. The forum will try to bring an amicable solution to the border dispute between the two states and will promote peace, harmony and feeling of brotherhood among the people, he said. 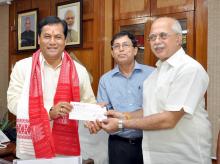 From Chennai with help

1 Sep 2017 - 8:51pm | AT News
Though miles away from their homeland, Assamese people residing in Chennai along with Association Chennai donated ₹ 1 lakh towards the Chief Minister Flood relief Fund. 32 assamese people staying in...

11 Feb 2014 - 9:02pm | AT News
Two forest officials faced wrath of people in Majuli after a strayed rhino killed a local villager on Tuesday.The incident took place at 10 in the morning at Pohumara paddy field where despite...

25 Dec 2011 - 6:04am | editor
A local court in Guwahati on Saturday remanded Phani Talukdar to jail a day after police arrested the land mafia from his residence. Talukdar was arrested by Dispur police alleging his involvement...