Dulu Bhumij, ward member of Congress (i) of Lakuwa Gaon Panchayat, was murdered on Friday. In this connection two person namely Tinku Bhumij and Supa Bhumij were arrested by the Lakuwa Police. Arrested duo were kin relative of Dulu Bhumij and confess their crime before the police. 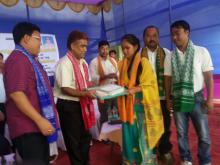 10 Jun 2015 - 6:32pm | Hantigiri Narzary
The All Bodo Students Union ( Absu) felicitated and conferred the 10th Kamal Kumar Brahma Derhasad Bantha to the topper students who had topped in Bodo medium in the HSLC examination at a programme...

12 Sep 2015 - 8:07am | AT News
Yet another army jawan from Assam lost his life in Pakistani terrorist attack sending shock in the entire Morigaon district. Identified as Chitra Saikia, he was killed at an encounter with terrorists...

20 Oct 2014 - 8:00am | AT News
Ranjan Daimary is likely to get bail again. The NDFB boss who has languishing in jail for the last two months is likely to be granted the bail on October 21 when the TADA court will be considering...