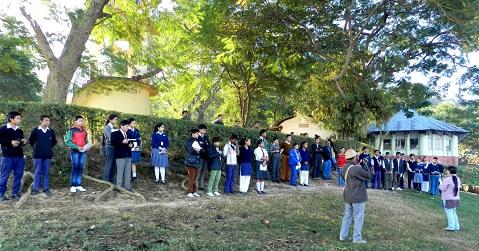 A group of school children from several schools in Guwahati today  were taken out on a nature trail programme at Deepor Beel Ramsar Site here at the initiative of Aaranyak, a premier bi-diversity conservation organisation in the Northeast.

The children were exposed to wonderful experience of bird watching by experts and volunteers of Aaranyak who also hosted a group discussion and quiz on tiger as part of the event.

The nature trail programme was organised as part of  ‘Kids for Tiger Conservation’ programme with partnership of Aircel and Sanctuary Asia magazine, according to Manas Kumar Bhattachryya, city coordinator of Kid for Tiger.

About  twenty teachers and parents of the school children also took part in the nature trail programme to share experience with the children.

Moderate polling in progress in Assam

23 Apr 2009 - 3:34am | editor
Moderate polling is reported in altogether eleven Lok Sabha constituencies in Assam after voting began at 7 in the morning. Barring a few stray incidents, polling is by and large peaceful. The turn...

21 Feb 2013 - 6:23pm | SK Hasan
Due to the forthcoming general election of Nagaland  on Feburary 23, Sivagagar district administration declared dry day on Feburary 22 and 23 in the Assam-Nagaland border areas. All wine shopes...

8 Mar 2014 - 4:39pm | AT News
Hundreds of Delhi University students from Assam staged dharna in front of the Assam Bhawan demanding immediate release of Akhil Gogoi a day after the KMSS president was remanded to jail.With banners...