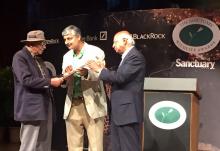 1 Jun 2010 - 1:31pm | Raktim Baruah
In order to bring a stabililty to the north eastern part of the country a new round of talks will be held on June 1 between NSCN (IM) and the central peace-negotiator at Nagaland. According to report...

15 May 2013 - 3:43pm | Ujjal Borah
To create awarness about environment and nature among young generation and all sections of people of the society, People's Friend Foundation is organizing an All Assam Environment Photography...