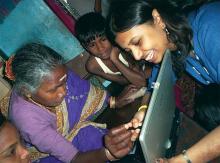 25 Mar 2010 - 10:34pm | Mowsam Hazarika
A student of design, Indrani Medhi of Assam, India has developed a design process to expand the impact of technology to those who can't read. She has developed text-free user interfaces (UIs). These...