The mushroom industry in Assam initiated in the early 90’s by Assam Science and Technology Environment Council (ASTEC) taking a group of youths to Pradhan in Madhya Pradesh for training on mushroom production. Soon Small Industrial Development Bank of India (SIDBI) promoted mushroom cultivation activity through training facility at Santi Sadhana Ashram in Guwahati with technological support from them Regional Research Laboratory (RRL) Jorhat. Dr Y Rathaya, Dr Robin Gogoi of the Assam Agriculture University (AAU) Jorhat and Dr R K Adhikary of RRL along with scientists from Defense Research Laboratory (DRL) Tezpur taking up intensive effort in popularizing this unique activity. With support from all this initiatives and with technical assistance from the National Council for Mushroom Research and Training (NCMRT) Solan now Directorate of Mushroom Research (DMR) a pioneering organization named Protein Food started with the 1st fully equipped private commercial Spawn Production Unite in the entire Northern India in the year 1995 with support from National Small Industries Corporation and Central Bank of India. Further in 1996 with the initiation of Mr Binod Choudhary retired Deputy Director Agriculture Deptt, Professor Shri Binod Baruah and many such youths started an unique and innovative organization Mushroom Development Foundation (MDF) paving a new era of development of mushroom cultivation among the small and marginal farmers mainly in North East India. MDF initiative in advocacy and policy formulation has resulted in many fold funding and development activities to be taken up in several states and organization in the North Eastern States. Among hundreds of development initiatives by MDF some of the significant being Assam Rural Infrastructure Agricultural Support Project (ARISP) , State Institute of Rural Development (SIRD) Assam, District Industries Meghalaya including several international funding in this sector from The Clarence Foundation USA, The Ashoka Innovators for the Public and several more foreign investment in this sector.   This efforts accumulated together around mushroom cultivation is paving a unique road  progressing towards the needs of a strategic road map for coordination and networking among all the developing agencies in the North East in creating a common platform for bringing these efforts into a sustainable industry. 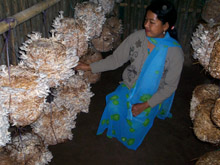 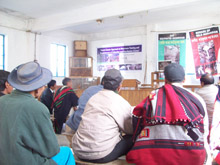 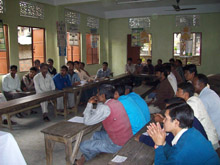 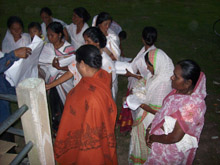 The hook that has caught mushroom is for it being tasty and a healthy food and at the same time it is easy to cultivate it at low cost giving high returns. In a developed country 7 out of 10 people eat mushroom regularly and in Indian markets demand for mushroom is growing at over 25% PA (Data as per MAC Plan by Ministry of Food Processing).  The world market for mushrooms has crossed $45 Billion today. The agro-climatic conditions in North East are conducive for Mushrooms and the availability of raw material is good for several species of mushroom to be grown in a cost effective manner. Further Mushrooms have the potential to impact livelihoods of poor, landless and marginalized farmers as it takes much lesser space to grow as it is cultivated inside a house vertically making it ideal for women to pursue this occupation at their home. Further there is a big scope to develop a parallel collection and distribution system in the market from the farmer’s perspectives. This gives an opportunity to the small and marginal farmer to have an additional income and potential to participate in the market dynamics using mushroom as a tool while keeping a scope for pursuance in integration of their regular produced commodities.

Lack of awareness on mushroom cultivation especially among the farmers and on mushroom consumption among the non tribal population was an initial problem but the real problem in agriculture is the non existence of a pro-farmer value chain. This has led to emergence of several socio-economic issues among the small and marginal farmers that provide inconsistent financial returns as quality production inputs and the market for the produce is often beyond their reach. The farmers are mostly confined into very small economic sizes and cost of the last mile supply chain to reach out to them is extremely high which results in poverty trapping and several underlying problems for them. Further they have little control on their collection and distribution which results in poor negotiating power of farmers in the market. This has led to catastrophic (about 9 million farmers left farming 2012) effects upon the environment as the farmers are increasingly losing their right to choose traditional mix cropping patterns and nutritious crops of their choice and are virtually forced by the market forces to go for large scale mono cropping. Mushrooms could give some of them an additional income which will help them to work out an innovative system for the entire farming community to participate in the market economy by addressing the following issues:

The effort in finding solution to the mushroom industry for sustainability from the small producer’s perspective has the best potentiality through a hybrid model of a not-for-profit and a for-profit entity to work together in the process. In order to achieve a fair balance between people and profit to alleviate poverty and strengthen economy in a sustainable manner developing a social enterprise to pursue one stop solution by:

The coordinated effort of MDF has so far resulted into achieving:

Since 2005 organized farmer’s federations and hundreds of entrepreneur’s capacities were built for replicating the model of hub and spoke across the region.

Govt. of Assam, IFAD, SIRD etc. appointed us consultants for various government/donor run livelihood programs and over 100 C&DCs community buildings were built in the process.

The hybrid model needs to focus on developing an ambitious ‘E-FILM project’  to showcase results in one of the poorest districts of North East and simultaneously organizing the existing clusters  by doing the following in the next 5 years:

The above needs coordination and networking among all the developing agencies in the North East in creating a common platform and this flagship initiative taken up by MDF named as E-FILM with activity sequencing as follows:

Going forward, MDF’s socio economic project E-FILM aims in bringing other livelihood opportunities to create balanced growth by achieving cost effective marketable solutions through forward marketing. It aims to do this through integrated livelihood analysis and mapping by developing a supply chain management system through which every income generating activity will integrate raw material procurement and track production through innovative technology solutions backed by a strong Monitoring Information System (MIS) & Geographic Indication System (GIS) system for ensuring a fair and steady revenue stream to the stakeholders in the most cost effective manner.

Likely outcomes in finding sustainable solution from this quest for the small and marginal producers will be:

The above is to be achieved by a producer company formed among the farmers/entrepreneurs coming together in bringing a Brand North East image. So far the only agro-industrial concern specialised in mushroom since 1994 in North East M/S Protein Food with, Export Import, FPO, ISO 9001-2008 Certified and ‘mushfill’ trade mark registered brand may pave this road in creating the producer company in setting up a pan North East Farmers Producer Company in finding a sustainable solution and Mushroom Development Foundation creating the linkages and working as a regulator in developing a sustainable social enterprise.

We want to do mushroom

Permalink Submitted by Rajdeep Sengupta on Fri, 05/12/2014 - 15:27
We want to do mushroom cultivation ina professional way in Nagaon Assam. The idea is to make it large scale viable production and support to local farmer with job opportunity and economic upliftment. We are a startup private limited company .

I want to know the detail

Permalink Submitted by DIPANKAR CHAKMA on Sat, 24/01/2015 - 22:06
I want to know the detail procedure of admission to learn mushroom cultivation at shanti sadhana ashram Guwahati. So please let me know here @dipankar069@gmail.com,

Permalink Submitted by A.Gohain on Tue, 11/08/2015 - 07:21
Good day!We would like to attend your semilar in regards to oyster mushroom cultivation ..Pls send us details whom to contact for the same...Thank You.A.Gohain Naharkatia..

Sir, I am a defence person

Permalink Submitted by Amitav Chowdhury on Sun, 24/09/2017 - 08:18
Sir, I am a defence person and soon (Jan 2019) i am going to retire. My age is 33 years. After retirement i am planning to cultivate mushroom. I am a resident of Guwahati. Please suggest me what I have to do. Where will I get training and knowledge. Please mail me. Thanks

23 Jan 2015 - 5:43pm | Hantigiri Narzary
Altogether 1,441 teachers from four districts of BTAD were given away appointment letters for regular posts in Lower Primary and Upper Primary Schools at a function held at Bodofa Cultutal Complex at...

1 Feb 2017 - 8:11am | AT News
Northeast India Women Initiative for Peace (NEIWIP) expressed grave concern over the ongoing situation in Nagaland after the government decided to reserve 33 per cent of the seats for women. “We...

1 Apr 2015 - 10:49am | AT News
The Supreme Court is unhappy with the Assam Government’s affidavit on the measures to update the NRC.A division bench of the apex court comprising Justice Ranjan Gogoi and Justice and RF Nariman...