Security forces on Tuesday had recovered huge cache of arms and ammunition from Goalpara district along Meghalaya border. Following a tip-off, troops of army and police had launched operation at Gosaigadhowa area in the bordering district and recovered the arms and ammunition belonging to Garo National Liberation Army (GNLA) and United Liberation Front Of Asom (Independent).

"The troops launched operation at the bordering about presence of a militant group of GNLA and ULFA. The militants hiding at the area and fled before security forces reached the area," a top police official said.

Security forces had recovered three 7.65mm pistols, two hand grenades, one Chinese grenade, one gelatin stick, one TNT slab and other war like stores and medicine from the area. 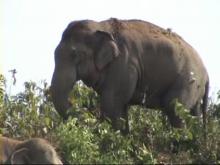 15 Jul 2011 - 1:53am | Hamidul Gani
A woman was trampled to death by a wild tusker at a village near Dhupdhara in Goalpara district in the early morning of Wednesday. After damaging the house the elephant attacked Lalita Rabha (28...

22 Aug 2010 - 5:17pm | editor
A rickshow puller and a minor boy were injured during an encounter between security forces and ULFA in the outskirt of Guwahati on Sunday. The encounter took at Hospital Chowk in Sualkuchi at...