The ruling Congress won the Meghalaya's by-poll which was announced on Tuesday.

Congress candidate Bluebell Sangma had defeated her nearest rival Pillipole D Marak of the National People's Party by margin of 2550 votes in the by-election of Chokpot assembly constituency.

Bluebell Sangma, a former member of Nationalist Congress Party who joined the Congress party before the by-poll announced.

In the 60-member Meghalaya assembly, now Congress has 30 seats. 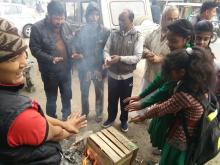 12 Jan 2018 - 6:50pm | AT News
Kokrajhar: Kokrajhar along with other BTAD districts are reeling under severe cold as the mercury level has gone down, down and down. The day marked nearly 9 degree Celsius early in the morning...

Wild tusker kills one at Dudhnoi

7 Aug 2011 - 7:20pm | Hamidul Gani
A 55 year old person was trampled to death by a wild tusker at a Village near Dudhnoi in Goalpara district in the early morning of Saturday. After damaging the house the elephant attacked Jogesh Nath...

23 Jul 2015 - 2:09pm | AT News
Dima Hasao police are still clueless on the video hall shoot out inident where a child was killed and anohter sustained injury on Tuesday night.  Police suspect the involvement of militants. But...