The normal life was affected by a dawn- to- dusk bandh called by the United Liberation Front of Asom (ULFA) in protest against the arrest of MASS activist Lachit Bordoloi and fake encounters in the state.Markets were closed,shutters of shops were down ,educational institutions, State and Central Governtment offices were remain closed.No vehicles were plying on the road.The NH-37 looked deserted during the Bandh.

Gogoi gets govt bunglow in Delhi 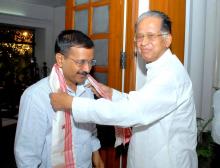 10 Apr 2015 - 7:11pm | AT News
The Delhi government has allotted a bungalow to Assam chief minister Tarun Gogoi.Government officials told Assam Times in Delhi on Friday that the Cabinet Committee on Accommodation (CCA) formally...

2 Aug 2015 - 7:52am | Hantigiri Narzary
Kokrajhar police have arrested two persons for allegedly issuing fake birth certificates to be used for NRC purpose.Identified as Zhumor Ali and Jahirul Sheik of Ghoramara, they were caught on...
Follow @Assam Times