Finally, Akhil Gogoi has come out of jail hours after the Titabor Sub Divisional Judicial Magistrate granted him bail in a pending case.

The KMSS president came out of the Jorhat Central Jail at 5 in the evening to be greeted by hundreds of KMSS activists who were eagerly for the moment.

The lower court granted bail to Gogoi a day after police shifted the KMSS president from Guwahati Central Jail.

Judicial magistrate Abhijeet Kumar Baruah granted bail on a personal bond of Rs 10,000 on Monday after examining the medical reports of the KMSS president and the case diary filed by the Titabor police.

Gogoi was airdashed to Jorhat jail on Sunday after police got transit remand of the KMSS president in connection with the Case No 17/14 registered on February 3. 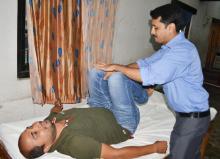 12 Sep 2015 - 5:27pm | editor
The city based media persons are suffering from various pain related ailments relating to their neck, shoulder and backs. It was found during a daylong physiotherapy camp, which was organized at...

24 Apr 2016 - 11:29am | Drishana Kalita
For the first time ever, forest guards of Manas National Park, will patrol on motor bikes instead of on foot! The Tiger Conservation at Manas National Park has unfolded a new chapter recently....