Amid tight security arrangement, Jorhat is gearing up for the voting on Monday. The voting will begin at 7 in the morning at 1, 579 booths.

The authorities have deployed over 3,000 officials apart from 1700 electronic voting machines to ensure free and fair polls.

A triangular contest is expected in the constituency where 11,87,779 voters will exercise their franchise till 4 in the afternoon. The polling officials have already reached their destination in the afternoon.

12 Nov 2008 - 2:37pm | editor
After being confirmed that NDFB was involved in the recent serial blast in Assam, security forces have been cordoning off an NDFB designated camp in Darrang district since Monday.According to... 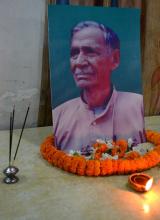