The Supreme Court on Wednesday rejected interim bail for Kamal Medhi who has been booked in connection with the Pranab Boro self immolation case.

The division bench of the apex court heard the petition moved on his behalf where the KMSS general secretary was denied bail in view of the seriousness of the case pending against him with the Dispur police station.

Medhi moved the top court after the Gauhati High Court refused to grant him anticipatory bail in connection with the sensational case where a KMSS activist died in self immolation attempt in Dispur on February 24.

No respite from flood woes

23 Jul 2016 - 1:32pm | AT News
Assam continues to reel under the flood waters following the incessant rains that clash the state along with the catchment areas in Arunachal Pradesh. The mighty Brahmaputra and its tributaries have... 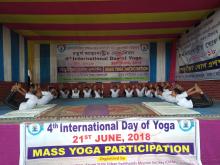 21 Jun 2018 - 6:39pm | Shajid Khan
UDALGURI:  Along with the rest of the country, the 4th International Yoga Day was observed in various parts of Udalguri district. The Udalguri district administration in association with the...

23 Feb 2015 - 10:09pm | AT News
The All India United Democratic Front has put a stop to all speculations on a pre poll alliance with the ruling Congress party and made it clear that it will continue to go alone. In a statement, the...