Property worth one crore has been left ravaged while a 12 hour long devastating fire that broke out on Thursday midnight at a goodwon in Jorhat town. Eyewitness say the fire broke out at the ground floor of the a four storied godwon in the Chambers Road which later was spreading to the top floors. Fire tenders from Golaghat, Sivasagar, Dergaon, Roworia Bokakhat were pressed into service but the fire engulfed property worth corers of rupees. Jorhat Deputy Commissioner L S Changson and the administrative officials had sought help of ONGC fire fighters from Nazira. These tenders arrived and started operation and the fire was doused in the morning.

11 Mar 2019 - 9:53am | Shajid Khan
In a bid to enlighten the journalists,media researchers,journalism studenrs on fact-checking to ultimately identify fake photos, videos and other contents spreading misinformation and fake news in... 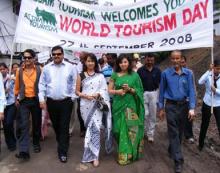 27 Sep 2008 - 10:22pm | Pranjal Barua
The Assam Tourism Development Corporation (ATDC) today celebrates the World Tourism Day like the other years at Guwahati and rest of the state. Organising an awareness rally with film personalities... 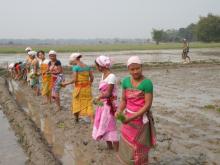 20 Feb 2012 - 1:52pm | Jayanta Kumar Das
The plantation of Bodo rice in a plot of nearly three hundred bigha land under BGREI (Bring Green Revolution to Eastern India) scheme, has recently been inaugurated at Bhergaon on February 8....