A general election of many firsts

The 2014 General Election is setting new trends right from polarized campaigning, turnout of voters to electioneering costs – which is billed somewhere at $5 billion making this election the costliest ever held in this country. It is also the second most expensive campaigning only after the last American presidential election that pumped out $7 billion to elect Barack Obama. There is no space in the public domain that is free from election campaign. No sooner one tunes into a website, email or any social networking sites, one is sure to hit by an advertisement. The BJP is leading this election advertisement expenses at the backdrop of a faltering Congress party – whose campaigning and body languages of some its senior leaders followed by junior and senior leaders deserting the party is an indication of its apparent defeat.

Well if one has to analyze does advertisement really works then it really do in a country like India. Though the effect of advertisement has declined in the last three decades, says western corporate experts, but there are an overwhelming number of citizens in this country who goes to the market to make purchases after they have seen something in the television, opines the same experts. In one hand the western experts attributed this decline to the plethora of new online media for search, review and buying which gives consumers a virtual experience to buy things, something that a television set cannot provide. There is a rising tendency among consumers to make decisions at the point of purchase than the other way round. However, the same experts feels otherwise when it comes to India where the large consumer base is targeted more through television sets contrary to what the trend is elsewhere. In this election, if the two major national political parties are spending some whooping and unthinkable amount of money for advertisements, which may do away with the country’s poverty if spent with right earnestness, then the various television channels at the same time have witnessed their fortunes soaring to new heights. This comes once in five years and news channels are seen putting their innovations and thoughts into newer production areas, which are paying off for them as the political parties are opting anything that connects them to the people.

Though the effect of advertisement is pretty small as experts say that sales return to advertising is 1/10th of its input in terms of expenditures, and so the electorate is witnessing heavy bombardment advertisements in the electioneering months of late. That these advertisements are paying off can be judged from the heavy turnout of voters in this election. It is hoped that this trend will sustain till May 16 – when the result for the election will be declared. But advertisement is not be the sole reason behind this huge turnout of voters in this election as there are several other reasons and among them is the 150 million new voters who have enrolled into the country’s electoral roll. This number is more than what each political party received in votes in the last general election held in 2009. This is also an election where the political parties have actually adopted western style election campaigning by targeting the social media circuit with an eye on these youths. There is also a paradigm shift from the erstwhile traditional type campaigning in street corners, public grounds etc. as more attention is now on the easily accessible campaigning venues like internet content, social media, emails advertisements besides television and digital marketing efforts to capture the tech-savvy lots. Then there are also the fund-raising adopted by a particular political party known for its commoner-centric approach thereby earning it comments like “If they call themselves commoners then who is the real commoner in this country”.

In the northeast, Assam registered high turnout followed by Tripura, Meghalaya, Sikkim, Manipur and other Indian states where polls are held so far, surpassing the percentages of 2009. This high turnout of voters is also attributed to the growing need for a change that the people of this country are feeling is an urgent necessity. What does a commoner need to lead a good life, a job, controlled inflation, education for children, social security, house besides civic amenities like uninterrupted electrify, water supply etc. But the majority commoners in this country be it in Assam or in any other parts of the country are devoid of such amenities because the dirty game of politics have prevented people from getting their rightful dues. The political parties and their leaders are playing dirty games by penetrating into the daily needs of people. Today a commoner toils for his entire life and somehow manages two square meals a day for him and his family, forget about houses and the rest of it. The commoners, who are franchising in high turnout, have realized that their future is in their hands and not in some fanatic politician who uses the name of god for their mischievous intent.

The polarized campaigning seen in UP where two leaders were reprimanded by the Election Commission of India and banning their rallies coupled with ordering FIRs against them was also witnessed in Assam and Meghalaya where political leaders hit the lowest ebb. A perfume baron in Assam said that his god would not forgive him if a single vote goes to a particular political party. Whereas in Meghalaya the incumbent chief minister used words like “wolf in sheep’s clothing”, “dead man’s wish” etc. against a particular leader. Well in case of Meghalaya it is not sure how much will this help the party’s prospect but in Assam whether the high turnout can be attributed to the polarized campaign, only time will tell. Such is the scenario in this state, known worldwide for its tea, that a particular leader utilizes the name of his faith’s god at the backdrop of dubious voters from across the border. Now when has god started to bless only those who have sprayed a particular brand of perfume on their body leaving aside the vast majority? Do we need such a god at all in a secular country like India? Hope the electorates of Assam are intelligent enough to choose between the devil and the deep blue sea?

The new electorates are youthful, who are not going to swayed away by dirty polarized campaigning by politicians because for them what matters most is good education, institutions and better job opportunities to lead a good life. This youthful stronghold are conscious about whom to choose and whom to discard since targeting their base only during elections and latter forgetting them like a wind is not going to help any party. The case of UP is different from the rest of the country. If one is to assess these polarization speeches there is not much of a reaction from the commoners. For the commoners be it in any part of the country, what matters most is a smooth daily life. When a national media house visited the Moradabad Parliamentary Constituency in UP, where its legislator former Indian skipper Md. Azharuddin is alleged to have not done anything for this constituency, and questioned few Muslim youths what is their expectation from the new government they said that they want social security, jobs and said no to reservation. The channel next went to a brass workshop which is hit badly in recent times and their workers said that be it any government for them better economic policies that fosters their business, they will welcome. So be it in any part of the country for a common man what matters most is his daily life.

However, what has lead to the need for an urgent change is definitely what the countrymen have seen and lived in the last decade or so. For those “voters”, who have skipped over to India from across the border, may remain loyal to their brethren but the majority of the voters who are genuine resident knows where the wind is blowing. This turnout will actually bring in new hope for the people of this country, who are fed up with the “dark decade”, as any large uprising in contemporary world has resulted in a change. According to a renowned astrologer from the region, there lies an imminent change in New Delhi post election. He said that a particular prime ministerial candidate’s birth chart clearly says that he will lead the country. “In all probability his party will form the new government. But there will be initial hiccups and those disturbances will be sorted out,” he said sharing his astrological calculations. On asking about the nature of hiccup, the astrologer, who is known in this region for his correct takes on numerology and astrology, said that an incumbent leader might want to steal the show during government formation but not for too long. The astrologer, who claims that he is not a supporter of any political ideology or party, also said that the country is badly in need of a strong leader and this prime ministerial candidate seems to be the only one – who not only fits into that position but can also revive the volatile northeastern region, which has suffered more in the last decade or so. The astrologer predicted that there is a threat to the sovereignty and integrity of this region, which needs a strong hand. 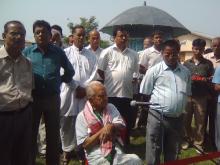 26 Apr 2009 - 3:36am | Jayanta Kumar Das
Long pending demand for a public play ground has at last been fulfilled here at Kalaigaon with the inauguration of the “Gandhi Bakari” near circle office, Kalaigaon. Nonagenarian freedom...

Bhaona in Make in India

19 Feb 2016 - 6:20pm | Sanjib Kumar Borkakoti
Society for Srimanta Sankaradeva took part in the first ever 'Make in India Week' in Mumbai held on February 13-18. A seven-member team displayed production of Aharya of Ankiya Bhaona there. Society...

25 Jun 2011 - 4:44pm | Peter Alex Todd
The Tarun Gogoi led government, have managed to come to power for the third time, and perhaps there was a lot of expectations from the people. The chief minister had himself said that the absence of...