The NDRF team deployed in relief and rescue operations in the flood-hit in Guwahati on Saturday fished out the body of Vivek Shah a day after the youth was washed away by the Bharalu  river.

NDRF authority confirmed that Vivek’s boy was recovered from the Bharalu river in Bhangagarh in the morning a day after he was washed away from Anil Nagar on Friday.

Rescue and releif efforts are also goining on in the worst-hit Anil Nagar, Chandmari, Nabin Nagar where rainwaters have been refusing to recede.

14 Sep 2014 - 11:05pm | Saibal Das
The recovery of a body has shrouded in no less mystery and sensation in Sarthebari on Sunday. Identified as Bijanta Patowary, the body was found at Sindhari Path under Sarthebari Police Station in...

14 Jun 2012 - 6:27pm | editor
Security forces recovered a huge IED in Sonari bordering Nagaland on Thursday. The powerful IED was recovered in the morning at Teokhabi village which was kept beneath the ground at the backyard of... 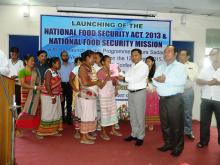