Another explosion: no injury

The incident took place near No 2 Bhetgaon area ten minutes after the Bijni town explosion where three workers sustained injury. But nobody was injured in the explosion.

Minutes before it, militants struck again in the area leaving three people injured on Sunday in Chirang distrcit.

Three people sustained serious injury when some unidentified miscreants lobbed a grenade in Bijni in the afternoon.

Eyewitnesses told Assam Times that three motorcycle borne youths lobbed a grenade near Bolanguri bus stand at Kuklun Road area where three persons were left critically injured as they were working at a garage.

Identified as Palan Mandal, Sujannam Das and Sujan Arya, the trio have been rushed to the hospital in a critical condition. 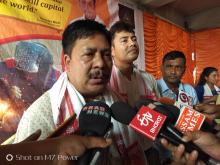 New political party in the offing in BTAD