Talking to reporters in Guwahati on Friday, Singh said that infrastructure has nothing to do with border dispute between two states.

He told it a day after in his address at the North East Chief Ministers’ Meeting in Guwahati, Gogoi blamed lack of infrastructure as one of the major issues for border disputes. 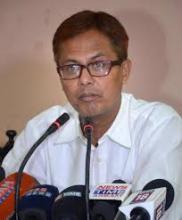 3 Jan 2018 - 5:46pm | AT News
GUWAHATI: Trouble brews for a BJP legislator after he passed uncharitable remarks on the National Register of Citizens a couple of days after RGI released the first draft naming 1.9 Indians living in...

25 Jan 2012 - 6:44pm | editor
A five-days Farmers’ Training Programme on Bio-diesel and its economic benefits was organized by the Department of Mechanical Engineering of North Eastern Regional Institute of Science and...

15 Dec 2017 - 5:03pm | AT News
GUWAHATI: Anna Hazare will never support Akhil Gogoi? Why? The KMSS leader has inclination to violence. This was what the Gandhian leader himself told reporters in Guwahati on Friday.  ...