The All Bodo Students Union (ABSU) and the All Assam Students Union (AASU) slammed the state government for arresting journalist Jaiklong Brahma and said that the government has failed to take stern actions against the armed outfits and arrested Brahma to divert their failure.

Lawrence Islary, president of the ABSU Kokrajhar District Committee said that the arrest of Brahma was unfortunate and it saw the failure of the government in taking strong actions against outfits in the region. He demanded unconditional release of Brahma.

Nabajyoti Roy, secretary of AASU Kokrajahr District unit condemned Brahmas's arrest saying that the government has totally failed in subverting the activities of armed outfits in the region as well across the state.

“The government must stop harassing mediamen and respect the freedom of the press in reporting events”, he added. 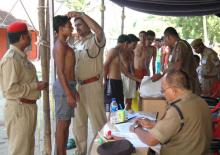 3 Mar 2012 - 10:09pm | editor
The situation in Lepetkota is still on the boil a day after a worker died in firing. Thousands of workers are striking work on Saturday demanding action against the CISF personnel responsible...

16 Apr 2009 - 11:14am | editor
Fierce gunfight erupted between security forces and militants at a polling station in Karbi Anglong district while two powerful IED were recovered in Assam's Autonomous District constituency where...