His name is Bikash Bagwar. The son of a daily wager earner from Duliajan is a first year student of the Regional Institute of science and technology in Meghalaya Mile in Meghalaya.

In view of his poor family background, the RIST authority has waived the college fees based on his mark which stood at 71% in higher Secondary from Digboi College.

But the problems are not over for Bikash. Even after he was exempted from the college expense, he has facing grim crisis for food and lodging which is no less than Rs 3500 per month. 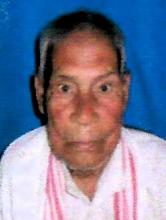 20 Sep 2015 - 3:25pm | Jayanta Kumar Das
Noted Gandhian worker and lifelong follower of Vinoba Bhabe,Sarat Chandra Deka breathed his last at his residence at Kalaigaon on September 19 at 7 pm.He was 85 years old at the time of his demise....

11 Apr 2008 - 5:05pm | editor
One person has been left seriously injured when security personnel of a private company were resorting to blank firing to disperse a group of people who gheraod an office at Barboruah in Dibrugarh....
Follow @Assam Times