400 students get degrees at DBU

The Governor of Assam and Visitor to Assam Don Bosco University Shri Janaki Ballav Patnaik presided over, 12 September, at the 3rd annual convocation along with the Chancellor, Vice-Chancellor, and a galaxy of dignitaries from civil, church and academic institutions in the city.

Addressing the gathering of some 1,000 people, the Governor encouraged students “take one step at a time and if you commit a mistake, just learn from it and move on.”

He told graduates, “believe that you can do anything you put your mind to. Nothing is impossible if you have the conviction in your dream to fulfill your goals and overcome the obstacles that may come your way.”

The ADBU Chancellor and the Salesian Provincial of Guwahati Fr V.M. Thomas appealed to graduates saying, “use your status and influence to raise your voice on behalf of those who have no voice… then it will not only be your proud families who celebrate your existence, but thousands of people whom you have helped change their realities.”

The Chancellor reminded graduates the words of Don Bosco whose birth bi-centenary will be celebrated in 2015 (16 August). 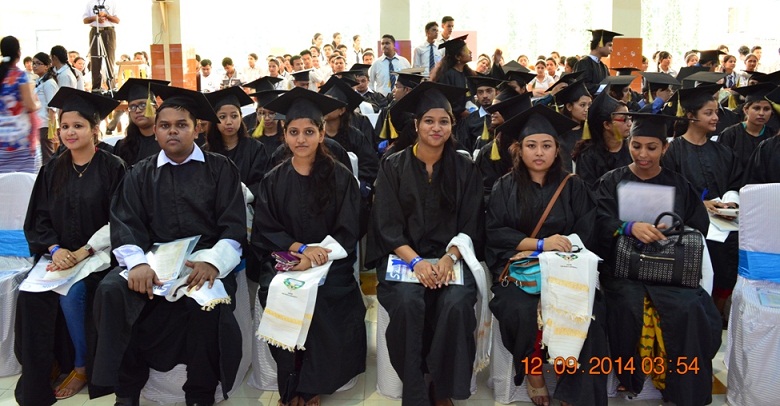 Don Bosco said, “We do not need magic to change the world, we carry all the power we need inside ourselves already: we have the power to imagine and do better.”

In the DBU Global on-line courses, 39 Post Graduate degrees of MBA, 6 MSc-IT and 28 MSW were conferred.

Breaking away from the traditional university certification, ADBU this year introduced an additional one-page certificate giving a detailed and comprehensive picture of the candidate’s performance, both academic as well as the skills that the student acquired and demonstrated during his/her stay at the University.

Every graduating participant at the convocation was honoured with a specially prepared scarf made to mark the occasion.

With the introduction of research leading to the PhD degree in 2011, ADBU now has 166 research scholars in 17 disciplines under the guidance of 44 research guides. While 48.1 per cent of the faculty hold doctoral degrees, 29.2% are actively pursuing doctoral research in various Indian and foreign universities with an output of 1.6 publications per faculty member.

The Vice Chancellor announced the University’s permanent campus at Tapesia with the first cluster of buildings and allied facilities including an academic complex to house the four Social Science Departments together with 2 student hostels, a food court and 55 staff quarters would be ready by June 2015.

The MoUs signed with the National Boards for Rubber, Tea, Cashew, Coconut and Spices will ensure demonstration farms and seed production centres as well as research  avenues for pest resistance, hybridization, and mass multiplication through tissue-culture, and a training platform for social outreach programmes in 42 villages.

The VC added, “The detailed Master Plan has ample provisions also for recreational and sports facilities, parks and quiet corners, cycle paths and jogging trails, a bio-diversity park, an amphitheatre, a convention centre, a school and a health centre, and a lake within the campus for the harvesting of rainwater. A mini golf course, a wellness centre, and a mall, are other projects on the anvil at the 500 acre Tapesia tea garden campus.”

Established in 2008 as the first State University of Assam in the private sector, ADBU is managed by Don Bosco Society which has 42 institutes of higher education as well as 123 institutes for Technical and Vocational Training in India.

Spread out in 132 countries, Don Bosco Society worldwide imparts learning to some 15 million young people, especially belonging to the marginalized sections in society. 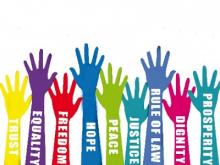 10 Dec 2014 - 4:16pm | Ranjan K Baruah
Human rights are integral part of life’s journey. In spite of having rights there are instances when our rights are challenged. In the past or at present there are examples of human rights violations...

18 Apr 2018 - 11:54am | Akshaya Pranab Kalita
NAMRUP: More than 3,000 tea garden workers and their family members raided the management of the Dilli Tea Estate in Namrup reiterating a slew of demands on Wednesday. They thronged the office...