A two-day workshop on development of handicraft and languishing craft of Bodoland  was begun from Wednesday at Basic Training Centre, Kokrajhar.

Former Assam Agriculture Minister and Kokrajhar east MLA Pramila Rani Brahma graced the function as chief guest and inaugurated the workshop by lighting the lamp in the presence of participant,resource person and experts.

Brahma said the handicrafts in Bodoland region has great potential among society.She said that artisans who are expert on various handicrafts should be uplift and make them sustainability so that handicrafts in the region be gained in all aspects.

NN Rana Patgiri,Managing Director,BRAWFED said that the workshop has been organised to highlight  the potentialities of the handicrafts in Bodoland region.The experst who are attending as resource persons discussed and shared views thoroughly on various aspects of handicrafts including production of decorative eri-silk textiles according to new trend and fashion,improvement of product & productivity of Bodoland handicrafts for creating new opportunities on global trade,use of Bodoland languishing craft for generating employment.

Patgiri said that there about 2.63 lakh artisans of handicrafts in four districts of the council who are working on upliftment of various handicraft works among society.The Brawfed was trying to uplift potentials of the handicrafts in the council region. 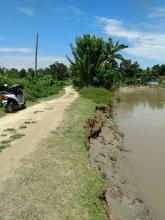 13 Sep 2016 - 12:55pm | Jayanta Kumar Das
River Noa has been furious during flood this year in and around Kalaigaon town.The very recent wave of floods has been posing threat to Kalaigaon-Adarshagaon road at No.2 Kalaigaon.The road could be...

28 Mar 2018 - 8:40am | AT News
GUWAHATI: The Assam police team probing the APSC scam has arrested four other officers on Wednesday two months after they faced handwriting test in Guwahati for forensic confirmation. In the second...

9 Jul 2007 - 4:23am | editor
Delhi: Caught in the controversy, the Uttar Pradesh police on Sunday collected the blood sample of PC Ram’s brother for DNA matching even as the family members of the kidnapped FCI official in...