The ABSU president said that kidnapping, extortions, gamblings and killings has affected the Bodoland region from all sides including on quality education and call upon all to thwart anti-social elements present.

26 Dec 2011 - 2:44pm | Nava Thakuria
A general meeting of Electronic Media Forum Assam (EMFA) is convened at Guwahati Press Club on January 2. The meeting, starting at 1 pm, is expected to finalize the programs of EMFA Awards 2011 in...

13 May 2018 - 2:33pm | Akshaya Pranab Kalita
NAMRUP: Simmering protest erupts in Namrup on Sunday when people thronged in thousands in the heart of the industrial town opposing the Citizenship (Amendment) Bill 2016 that promises Indian... 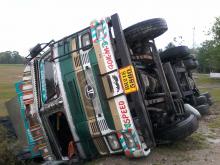 2 Apr 2015 - 9:53pm | Hantigiri Narzary
A truck had a narrow escape from the jaw of a death when his truck ferrying coal slipped into the road side in Kokrajhar on Thursday. The incident took place early in the morning on the NH 31(C...