Security forces are believed to have got the vital lead on the recent Adivasi massacre after they captured seven dreaded NDFB(S) rebels in Kokrajhar on Friday.

Interrogation is going on to extract more confession on the gory attack where at least 75 Adivasi innocent people lost their lives in Kokrajhar and Sonitpur on December 23.

They were caught during an operation by Army troops of 21 Division under 4 Corps and Kokrajhar Police in Ripu forest of Kokrajhar.

According to sources, the arrested rebels include Mathinga and another trained NDFB (S) terrorist. They were part of the action team involved in the carnage.

Training for youth at Golaghat

5 Dec 2013 - 10:38am | Suvansu Bora
A 3-days Training on Youth Leadership in Community Development was organized By Nehru Yuva Kendra, Golaghat in collaboration With NASA, Golaghat (a youth organization). The event was held on November... 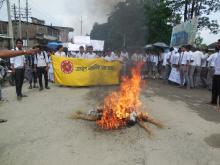 31 Mar 2016 - 7:42pm | AT Kokrajhar Bureau
A 20-years-old youth, who has gone missing since September last was brought back to his native village Jitpur Bishmuri in Kokrajhar.The youth was identified as Sibhu Murum, son of late Bisnhu Murum...
Follow @Assam Times