William West (English) and Paolo Rosso (Italy) have invited the media persons to attend the inaugural function of Bamboo Walkway in North Guwahati on 12 February 2015 staring at 1:30 pm. A private boat will be arranged for the press persons from Shukleswar temple ghat at 1 pm (Thursday).

The bamboo walkway is a structure made to underline the unique value of Rajaduar, North Guwahati, one of the most important Historical places of Guwahati.

It's being made with traditional techniques to create a spot of contemplation and leisure.

It's being made by the people of Rajaduar with the help of 3 Majuli craftsman to enjoy the landscape of the Brahamaputra river From the Manikarneswar Hill.

The walkway construction is going on, the opening will celebrate the first 70 meters that will terminate this first period of construction. Finally (2016) the walkway will be 400 meters long, starting from Rajaduar ferry Ghat.

The whole project is conceived to bring turistic and cultural attention on this area, creating a unitary circuit with the Kanai Barasi rock inscriptions and the Ahom Rampart.

A private boat will be organized for the press from Shukleswar Mandir, Pan bazar, at 1 PM in company of Mr. Paolo Rosso and William West. Further Information:

The action is made to celebrate Rajaduar and find a unity between Guwahati and North Guwahati.

Archeological traces of an ancient bridge are on the cliff in front of the Bamboo walkway, facing the Brahamaputra.

The bridge in 1206 a.c. helped Kamrup warriors, under the leadership of King Prithu, to defeat 12 thousand horsemen from the Turkish Afghan empire, as scripted in Kanai Barasi rock inscriptions.

Paolo Rosso & William West are making this project inside an artistic research program about the city of Guwahati and Assamese culture that involves other artists from Italy.

An exhibition about this project will be held in Venice, Italy, during the next Art Biennale 2015.

16 Oct 2014 - 9:49pm | AT News
Union Minister Sarbananda Sonowal blamed large scale influx for the entry of al-Qaeda and Jihadi militants in Assam for the last ten years.Talking to reporters in the sidelines of a function in... 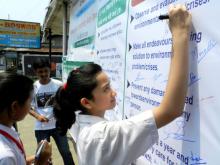 22 May 2013 - 2:04pm | Dr M Firoz Ahmed
Aaranyak organised a mass signature campaign on the occasion of the International Day for Biological Diversity with the current year theme of Water and Biodiversiy on Wednesday. As part of the day-...