It’s here, finally the BCCI’s brainchild ‘IPL Twenty20’ is out in the field. Amidst dazzling fireworks, dance and funfare, a new cricketing history has spilled over from the pitch of M. Chinnaswami stadium, Bangalore, grabbing the headlines to be in the heart and spirit of the cricket-funs across the world.

Perhaps, the BCCI’s baby concept is an inescapable reality at your door steps. No doubt, either ways you may call it ‘a Cricket Tamasha’ or ‘a High quality cricket’-really?. Yet the fact is, though too early to say, will the IPL bring ‘moksha’ to Indian cricket. Certainly, doubtful. Why not call it ‘a boom that will lead to doom’ of the Indian cricket. Sure, this would be appropriate term to call it so.

In some ways, IPL isn’t just about the reinvention of cricket. It is the transformation of the Indian cricket into a smart entertainment product in a more glamoursed and globalized way. Obviously, there is one serious issue that will arise in the future, if at all the league continues.
Out of the eight teams, six are owned by the corporate tycoons. Right now, the BCCI allows each franchise owner to hire only four foreign players in each team. The question is ‘will this policy continue?’ Will the franchise owners be content with majority Indian players?

Since the league is more of business and profit, only the top cricket legends can meet the demands of the corporate giants. The business tycoons are ready to hire the competitive players at any cost from around the world, as it adds to their income. There will be no room for non-performers. The lack of good cricketers in the country will force the team owners to look for talents outside the country. Sooner or later, most of the Indian players will be out of the tournament. After all, will it not be a doom’s day for Indian cricket? - a killing field of talents where no Indians can survive.

So, for obvious reason, the baby ‘IPL Twenty20’ is not only a cocktail of sport, entertainment and business - but a story of bleak and uncertainty. Love it or hate it, the history will remember in its own way. And remember the screen kings and queens have already descended to the ground. What is glorious today can also be a nightmare tomorrow.

Permalink Submitted by Mort on Fri, 15/05/2009 - 17:32
Bugger off CONNIVING Brendon McCullum with IPL Cricket 's most hated John Buchanan. All KKR players have been devastated - with no awards , smiles or honour.

49 sickened by ‘unknown illness’ in Churachandpur

10 Jul 2017 - 9:31pm | AT News Imphal
An unknown illness appeared to spread in the district as many as 49 people including children have reported becoming sick after an illness at the interior village of V Sinai on Monday. ...

6 Sep 2017 - 9:52pm | AT Kokrajhar Bureau
Kokrajhar police have arrested a person three days after he allegedly kidnapped a married woman who was safely rescued.  The woman was rescued a couple of hours after the incident  from... 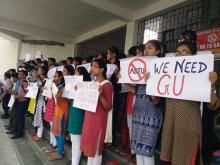