Repolling in two polling station, one each in Kokrajhar and Udalguri district was passed of peaceful with turn of 68.09 percent and 69.76 percent polls respectively today amidth tight security which was started from 8 am.

In Kokrajhar, the repolling at 26 No. Sahajuri LP school under Saraibil constituency of Gossaigaon subdivision saw a long queue since morning in peaceful manner and was recorded turn of 68.09 percent polls.There were recorded 476 voters franchised their votes in the repolling out of 699 voters in the station as the poll was stopped due to alleged of rigging on Wednesday.

In Udalguri, the repolling at 32 No. Sapkaiti LP school polling station was turn of 69.76 percent polls as voters come out to caste their votes from morning.There were 582 voters in the station.

The district administration has arranged vigil securities during the repolling to thwart unwanted situations in the districts. 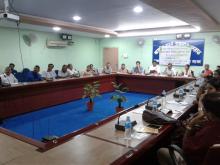 5 Jun 2019 - 9:43pm | AT News
World Environment Day was observed  by Assam Higher Secondary Education Council Assam in its office premises at Bamunimaidam, Guwahati on Wednesday. A seminar on 'Conservation of Water' was...

18 Oct 2015 - 11:15am | AT News
Rows and rows of earthen lamps dazzled on Sunday evening when people from old to young, towns to villages, hills to vallies observed Kati Bihu with traditional pomp and gaiety.People in their...

11 Sep 2015 - 9:57pm | SK Hasan
Noted historian and leading citizen in Nazira Akhil Paniphukan passed away on Friday. The end of the 90 year old Paniphukan came in the wee hours at his own residence in Nazira town. He is survived...
Follow @Assam Times